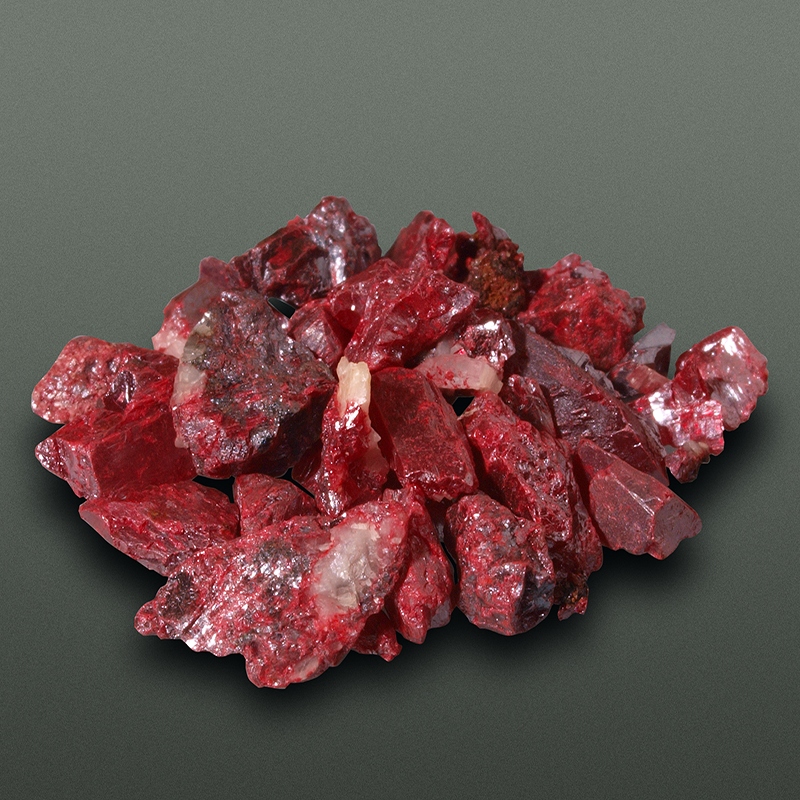 Cinnabar is the native red sulphide of mercury. It could be found as a liver-colored ore and occasionally as a dark red crystal with non-metallic adamantine luster.
Cinnabar, when ground, is the only bright red pigment that was known to the ancients. Not a particularly rare mineral, leading to it being well known by artists and more widespread in paintings than lapis lazuli.

"Let not your flesh colour freeze; let it not be too cold or purple, for carnation which approaches the whiteness of linen cannot bloom with the signs of life. But vermilion makes it glow with a more fleshy hue. Endeavour to produce this warmth. … In painting peasants, shepherds, and mariners, spare not yellow ochre with your vermilion. … Be careful not to light up the flesh tints in either sex with too much white; no pure white is visible in the living subject." - Rubens

There were many places in Europe where it could be found. Because of its popularity and demand, it became too costly so the price had to be fixed by the Roman government to keep it from becoming impossibly expensive. The cost to cover a page in manuscript with cinnabar or gold was the same.

"Nothing is more carefully guarded. It is forbidden to break up or refine the cinnabar on the spot. They send it to Rome in its natural condition, under seal, to the extent of some ten thousand pounds a year. The sales price is fixed by law to keep it from becoming impossibly expensive, and the price fixed is seventy sesterces a pound." - Pliny

Master Pigments' cinnabar pigment is prepared from natural cinnabar crystals. This rare form of the mineral is sourced from the mines in Hunan province, China. The process of pigment preparation starts with washing crystals, then continues with gradual wet milling in a metal free environment to prevent contamination. The crystals are first milled with big media, to gradually reduce the size of particles to fine sand. This fine sand is washed again to remove as many mineral impurity as possible. The next step is wet milling with smaller zirconia media (very hard and heavy), over an extended period of time. A long milling time with minimal contamination is the key to the preparation of this truly unique red color. After fine milling the solution is left to settle. Multiple washes of the pigment follow, until the wash water becomes pH neutral. Then the pigment is left to settle and air dried. As the result of this tedious process, the pigment comes out with a strong and vivid red color. Simply the true definition of red, without tendencies to lean towards orange or purple--certainly the king of reds.

The fine grade is a vibrant, vivid red. This is a must have pigment for any flesh tone. It's a very warm and strong pigment. Excessively powerful, use very little for flesh tints in mixes. The medium grade is darker in color and full of metallic sparkles.

Cinnabar is considered to be toxic because it contains mercury. Despite its toxicity, cinnabar has history in being used in traditional Chinese medicine. However it should be handled very carefully in a dry form or in a medium.